You roll out of bed with a song stuck in your head, and by the time you grab your morning cereal, this song has been replaced by some other, and you realize that they would go quite well one after another. By the time you get to your first class, you’ve already had at least five songs stuck in your head, and by lunchtime you’ve scrawled the rough workings of this week’s playlist onto a post-it note. 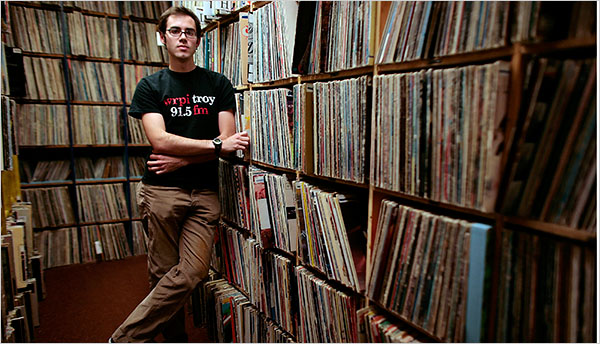 Photo Courtesy of Nathaniel Brooks for The New York Times

You are a campus radio DJ. Among other things, it means that at least a quarter of your friends are fellow DJs, you judge new acquaintances by the contents of their iPods, the highlight of your week is sitting in the crammed studio pushing buttons for a couple of hours, and you never, ever stop listening to music.

For a music enthusiast, there are several advantages to joining a campus radio station—and though I am biased, being a campus radio DJ at my own university, I will attempt to list these benefits as objectively as I can.

First, and most obvious of all, is that as a DJ you learn A LOT about music. Even if you already know a lot—even if you live and breathe music, and have a hundred favorite bands, and understand the meaning of terms like “post-electronic acid house”—you will inevitably discover new artists and genres. If you love music, what better way is there to channel your passion than to transmit it on air for the world to hear? (And if you happen to be in a band, having your own radio show gives you infinite opportunity for shameless self-promotion!)

Second—and this point is important because often it tends to be overlooked—there are, indeed, academic benefits to being involved with campus radio. If you are any sort of communications or broadcasting major—or if you might be considering such a major but are not yet sure—having a radio show will give you invaluable experience in the field, even beyond knowing which buttons to press: you will learn things like how a station is run, what are some of the FCC’s rules that apply to radio, and how to develop your own Radio Voice. (Ever notice how DJs have such confident voices? They have to learn that somewhere!) Third, there is the social aspect. Ballads could be written about the special relationship between co-hosts of a radio show; and at some point, you suddenly discover that no matter where you go on campus, at least one person will look familiar. You realize that you actually know that tall guy in the plaid shirt because he was there at the last weekly meeting. In my own experience, most of the “radio people” are a laid-back, friendly, and an incredibly diverse bunch, and you will definitely make some friends and meet interesting music enthusiasts at the radio station. (And do not worry if they make fun of you because the music you like is too mainstream—you can tease them in return for being too indie.)

Last but not least, being a DJ on a radio station is just FUN. Even if the idea of sitting in a tiny, unventilated room, surrounded by strange equipment with buttons and sliders, and listening to overly loud music does not sound appealing, it is actually, truly fun—especially if you have a co-host to talk to and fool around with. You have the freedom to play your favorite music, go on air to talk about student issues, current events, or what you had for breakfast, or invite your struggling musician friend to talk about her demo CD release. The bottom line is, besides all the aforementioned benefits, being a radio DJ is just plain AWESOME—but don’t take my word for it. Look on your school website to find out about your campus radio station, and then attend a meeting—you won’t regret it!

Ksenia Lebedeva is a freshman train commuter and psychology major at Montclair State University in NJ. She is involved in a number of campus organizations, most notably Psychology Club, the school’s Gay-Straight Alliance, and the campus radio station. She’s been an NSCS member since Spring 2011. Follow Ksenia on Twitter @DJ_Enteresting.